Tummel Bridge is situated at the western end of Loch Tummel in Perthshire and was built in 1730 to carry Lieutenant-General George Wade’s Crieff to Dalnacardoch military road across the River Tummel.

“The Highlands, being very mountainous and almost inaccessible to any but the inhabitants thereof do remain to this day much less civilised than other parts of Scotland” – Simon Fraser, Lord Lovat Writing to George I in 1724

In late 1724 Irish-born Major-General George Wade was appointed ‘Chief of His Majesty’s forces, castles, forts and barracks in North Britain‘ following his investigation and report on the situation in the Highlands in the wake of the 1689, 1715 and 1719 Jacobite risings. In July 1724 Wade, Member of Parliament for Bath, had been sent to Scotland to ‘inspect the present situation of the Highlanders…to make strict enquiry into the last law for disarming the Highlanders… and how the Memorial by Simon Lord Lovat, and his remarks theron are founded on facts…to suggest to his Majesty such other remedies as may conduce to the good settlement of that part of the Kingdom’.

After a thorough investigation Wade submitted his findings on 10 December 1724. He estimated that there were around 22,000 men in the Highlands able to bear arms, of which 10,000 were supporters of the government and 12,000 which were ready to ‘rise in arms in favour of the Pretender’. Needless to say, this caused some alarm to the government in London who were concerned about future Jacobite threats. Wade also stated that the 1716 Disarming Act designed to disarm the Jacobite clans following the 1715 rising had been largely ineffective. He recommended the re-establishment of the Independent Highland Companies to help police the Highlands, a new Disarming Act with harsher penalties and new forts to be constructed. In concluding his report Wade said: ‘The Highlands are still more impracticable from the want of roads and bridges’. On 24 December 1724 Wade was appointed Commander-in-Chief, Scotland, taking over from Lieutenant-General George Carpenter.

Wade set about improving the military infrastructure in Scotland with the repairing of Edinburgh Castle and Fort William, the construction of new forts at Kilchuimen and Inverness and the building of a road network to link them and the existing barracks at Ruthven and Kilchuimen to the lowlands, making the Highlands more accessible to government troops. The 61-mile Fort William to Inverness road was constructed 1725-27 and was followed by the 102-mile road from Dunkeld to Inverness, constructed 1728-30. The 43 miles from Crieff to Dalnacardoch was started and finished in 1730 and the 28-mile road from Dalwhinnie to Fort Augustus was constructed the following year. The military working parties involved in the road building typically consisted of 1 captain, 2 lieutenants, 2 sergeants, 2 corporals, and 100 men who Wade affectionately referred to as his ‘highwaymen’. The working season was from 1 April until the last day of October. Wade also ensured that the men involved in road work got double pay, with the additional money paid by the local counties. In April 1727 Wade was promoted to lieutenant-general.

In early 1730, with Wade’s Dunkeld to Inverness road nearly complete, the government allocated money for ‘a new road for wheel carriages from Crieff… to the river Garry of about 40 measured miles… to join the road from Dunkeld to Inverness’. Both roads would converge at Dalnacardoch between Blair Atholl and Dalwhinnie. Since the road from Stirling to Crieff was in good enough condition it was decided to start at Crieff, with work beginning in the spring of 1730. The road was completed later that year. The route from Crieff went through the Sma’ Glen and Glen Cochill then on to Aberfeldy where it was carried across the River Tay by Wade’s most impressive and expensive bridge. After Aberfeldy the road continued to Coshieville at the entrance to Glen Lyon and then on to the western end of Loch Tummel where the road would cross the River Tummel at Tummel Bridge. From here the road continued to Trinafour where it crossed the Errochty Water and from there it carried on to Garry Bridge and then on to Dalnacardoch.

The road was improved and extended from Crieff down to Stirling in the early 1740s by Irishman Major William Caulfeild, General Wade’s Inspector of Roads and the man appointed to continue the road-building programme following Wade’s departure from Scotland in 1740.

Constructed in rubble, the double-arched hump-back Tummel Bridge was started in the summer of 1730 by local laird John Stewart of Canagan under contact to General Wade at a cost of £200. Stewart was to be paid £50 on signing the contract and the remaining £150 on completion which was to be the end of the working season (end of October). A clause in the contract stated that the builder of the bridge would maintain it at his own expense for the next twenty years. Although the roads were constructed by parties of soldiers, the bridges were built by civilian masons with the stone being sourced locally. Work on a bridge could still be continuing long after a stretch of road was already completed. William Taylor mentions in his book The Military Roads in Scotland: ‘While the soldiers were pressing on with the heavy, but comparatively simple work of road making, the masons and other craftsmen were building the necessary bridges… there were always more soldiers than masons, resulting frequently in a time lag between road and bridge building’.

In the contract for Tummel Bridge dated July 1730, Wade does not go into details about the design or construction of the bridge, which along with the exact spot where it was to be built (within a mile), was left to the contractor. What is specified is a minimum span for the arch, ‘at least forty-two foot between the landstools’, along with a 3-ft high parapet and a 12-ft wide roadway, which appears to be the standard width on most of the bridges constructed during Wade’s tenure.

To build the military bridges, first, the river banks would be cleared to make way for a solid foundation. Then a wooden frame would be erected which would support an arch barrel. The keystones were then put in place after which the arch barrel and frame would be removed. A lime harling was then applied over the stonework as a protective coating. As with the roads, the stone required for the construction would usually be quarried nearby. Bridge-building was time-consuming and expensive.

Notes on Canmore, the National Record of the Historic Environment, mentions: ‘Old Tummel Bridge, c. 1734. Constructed in rubble to carry Lt Gen George Wade’s military road, the now by-passed bridge comprises one very large hump-backed span, with a smaller (Northern) arch. This bridge carries the former line of the B846 public road (formerly the military road MR3) over the River Tummel to the W of Loch Tummel and Tummel Bridge village.’

The private dwelling house next to the bridge was once a kingshouse inn, which was built on the site of a hutted camp used as accommodation for the soldiers involved in building the road. These camps were usually placed every ten miles and quite often later developed into inns or kingshouses as they were known since they were on the king’s highway. The inn at Tummel Bridge was mentioned in a letter sent by the German composer Mendelssohn during his travels in Scotland in 1829.

In an incident during the Jacobite Rising of 1745, Jacobite troops under Lord George Murray surprised and captured a detachment of the Earl of Loudoun’s 64th Highlanders who were guarding the bridge on 16 March 1746.

‘Whereas it is agreed between Lieut Genl George Wade for and onaccount of His Majesty, and John Stewart of Canagan Esqr, that the said John Stewart shall build a Stone Bridge Strenghtened with a double Arch over the River of Tummel, within less than a mile west of the House of the said Canagan, which Bridge is to have an Arch of at least forty two foot between the Landstools / or more if the breadth of the River shall require an Arch of larger dimension / It is likewise to be twelve foot in breadth including the Parapet Walls, which Walls are to be three foot High above the Pavement, and at least one foot broad, and to be Coped with good flag Stones, The whole to be of good materials amd well wrought, And to have an Access to the same extending so far on both sides to the Land, as to render it easily passable for Wheel Carriage or Canon, and likewise to make sufficient Buttments that shall Confine the Water to pass under the Arch, that in extraordinary Floods it may not damage or undermine the foundation, for which Bridge and all Materials, and Charges relating thereto, the said Lieut Gneral George Wade is to pay the said John Stewart, the Sum of two hundred pounds Sterling Viz: Fifty pounds on the Signing the Contract, and one hundred and fifty Pounds as soon as the work is completed, which he promises to finish before the last day of October next ensuing, and the said John Stewart does oblige himself to give sufficient Security before the last payment is made to uphold the said Bridge at his own Expense for the space of twenty Years from the date hereof, whereto we have interchangeably set our hands, this Twenty fifth day of July 1730’ 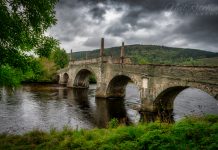 Ruthven Barracks during the Jacobite ’45 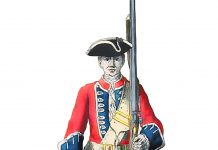