On 16th August 1745, two companies from the 2nd Battalion of St Clair’s 1st Regiment of Foot (Royal Scots) were ambushed by a small party of Jacobites at High Bridge, north of Fort William. The newly-levied soldiers who were led by Captain John Scott and Captain James Thomson were marching to reinforce Fort William at the onset of the Jacobite rebellion. It was the first military engagement of the Jacobite Rising of 1745.

After the landing of Charles Edward Stuart in Moidart in the Western Highlands was confirmed, the military authorities in Scotland began to move to crush the Jacobite rising before it could gather sufficient strength. On 10 August, Captain Scott received orders from Lieutenant-General Sir John Cope, commander-in-chief in Scotland, to march two depot companies of the Royal Scots – numbering no more than 60 men – from Perth to Fort William and reinforce the isolated garrison there. The rest of the 2nd Battalion of the Royal Scots were stationed in Ireland at this time and the depot companies under Captain Scott and Captain Thomson were holding units for new recruits. Based at Perth they were ideally situated to receive recruits from the highlands who made up around half of the battalion’s strength. On the 16th, after passing through Fort Augustus and with just 8 miles to their destination, the way was blocked at High Bridge on the River Spean, by a small force of Jacobites under Donald Macdonell of Tirindrish. Constructed in 1736, High Bridge was part of General Wade’s Fort William to Inverness military road, built as part of a network to facilitate the movement of government troops in the highlands.

Using the High Bridge Inn and the surrounding woodland for concealment, the Jacobites were able to give the appearance of a much larger force. Captain Scott sent a sergeant and a servant forward to investigate and negotiate. Both men were captured. Unnerved, the Royal Scots began to fall back towards Fort Augustus, taking fire from the Jacobite positions. Jacobite reinforcements under Donald Macdonnell of Keppoch began to arrive and assisted in the pursuit. Scott’s men began to return fire and formed a hollow square which made the Jacobites unwilling to close with the sword. As he was withdrawing up the side of Loch Lochy, Captain Scott was possibly intending to make for Invergarry Castle, the nearest place of refuge, however, with the arrival of more Jacobites on his line of retreat near Laggan, he soon found himself surrounded. With his troops running low on ammunition and with a wound to his shoulder, Captain Scott surrendered.

Captain Scott had lost around six men killed and more than a dozen wounded. The Jacobites had not lost a single man in the engagement. Scott was taken to Achnacarry House, the home of Jacobite clan chief Donald Cameron of Lochiel where his wound was tended to by Lochiel’s wife. The captured Royal Scots were taken to the nearby Achnacarry Inn before being marched to Glenfinnan where they met Charles Edward Stuart and would witness the raising of the Jacobite standard on the 19 August. Lochiel later released Scott on parole so that he could receive medical treatment at Fort William.

Following the Jacobite victory at the battle of Prestonpans on 21 September 1745, the 2nd Battalion of the Royal Scots was shipped over from Ireland to assist in fighting the rebellion and saw action at the battles of Falkirk and Culloden. The battle-hardened 1st Battalion was recalled from the war on the continent and was positioned on the south coast of England to defend against any French invasion attempt in support of the Jacobites.

A cairn commemorating the event was erected in 1994 by the 1745 Association and is situated near the south side of the now ruined bridge, of which only the pillars remain. 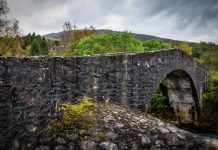 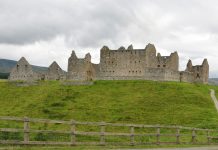 The Siege of Ruthven Barracks during the 1745 Jacobite Rising 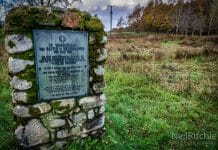 Killiecrankie Battlefield under threat from A9 Dualling