Home Places Soldier’s Leap in the Pass of Killiecrankie

In the evening of the 27th July 1689, Donald McBane, a Scottish government soldier fleeing the Battle of Killiecrankie, is said to have jumped 18 feet across the River Garry, to escape pursuing Jacobite Highlanders.

This is an account of the event from Donald McBane’s autobiography, ‘The Expert Swordsman’s Companion’, published in 1728:

“At last they cast away their musquets, drew their broadswords, and advanced furiously upon us, and were in the middle of us before we could fire three shots a-piece; broke us, and obliged us to retreat. Some fled to the water, and some other way; (we were for most part new men.) I fled to the baggage, and took a horse, in order to ride the water there follows me a Highlandman with sword and targe [shield], in order to take the horse, and kill myself. Youd laugh to see how he and I scampered about. I kept always the horse between him and me; at length he drew his pistol, and I fled; he fired after me. I went above the pass, where I met with another water, very deep. It was 18 foot over, betwixt two rocks. I resolved to jump it; so I laid down my gun and hat and jumped, and lost one of my shoes in the jump. Many of our men were lost in that water, and at the pass. The enemy pursuing hard, I made the best of my way to Dunkel [Dunkeld] where I stayed until what of our men was left came up; then every one went to his respective regiment.”

On McBane’s claim, Historic Environment Scotland in their summary on the battle mentions it as “an improbable jump of around 5 m across the rapids of the River Garry”.

There are a number of other points closer to the battlefield where McBane could have jumped across, with two locations at Killiecrankie village as strong possibilities. 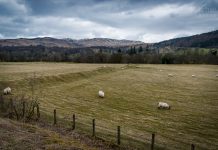 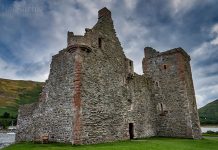