Following their defeat at the hands of the English navy in the summer of 1588, the surviving ships of the Spanish Armada were forced to make their way home around the north and west coasts of Scotland. Several ships were lost along the dangerous coastline in stormy weather. One ship, the San Juan de Sicilia, mysteriously blew up in Tobermory Bay off the Isle of Mull. Many believe that the vessel was carrying a large amount of gold coin.

The arrival of the Spanish

In late September or early October 1588, the badly damaged San Juan de Sicilia anchored in Tobermory Bay intending to take on supplies and make repairs. The 800-ton vessel was commanded by Don Diego Tellez Enriquez and had 63 sailors and 275 soldiers on board, was armed with 26 cannons and was carrying two large siege guns. Don Diego negotiated with the local chieftain, Lachlan Mór Maclean of Duart. The Maclean chief was a large and imposing man (Mór translates as ‘big’ or ‘great’ in English and was later regarded as ‘the most accomplished and warlike chief that ever held sway in Duart. His military talents were of a very high order.’

Lachlan Mór proposed that the Spanish would be supplied food and water as well as the necessary materials to repair the ship in return for Don Diego allowing the use of his soldiers. As part of the offer, the Macleans would also provide hostages, who would be returned once the soldiers were back. Don Diego agreed to supply Lachlan Mór with around 100 Spanish soldiers armed with arquebuses and also produced two small cannon. The professional Spanish troops were considered to be among the best-trained infantry in Europe.

The Macleans had a long-running feud with the neighbouring Macdonald clan and Lachlan Mór saw the potential of using Spanish troops in his fight against them. The Macleans and Macdonalds were not just local rivals, they were in a struggle for control of the sea lanes to Ireland and also fighting on opposite sides of the conflict there, with Lachlan Mór supplying mercenaries for Elizabeth I of England’s army and the Macdonalds supporting the rebel Irish lords.

Lachlan Mór set off with his newly acquired Spanish mercenaries to attack the Macdonald lands. For more than a month they ravaged the Macdonald islands of Egg, Muck, Rhum and Canna, where they burned homes and slaughtered in the most ‘barbarous, shameful and cruel manner, all the men, women and children’. After this, Lachlan Mór landed on Ardnamurchan and laid siege to the Macdonald stronghold of Mingary Castle. The siege lasted three days before Lachlan Mór returned to Mull. One possible reason for the abandonment of the siege was because the Spanish commander had ordered his forces to return to Tobermory in preparation for the voyage home.

The destruction of the galleon

In early November (possibly the 5th), after having spent over a month anchored in Tobermory Bay, the San Juan de Sicilia blew up. Records from the Privy Council of Scotland stated that the Spanish ship was destroyed at ‘the instigation of Lachlan Mor’. It is possible that Lachlan Mór ordered the vessel to be destroyed since he had links with Elizabeth I. The official Spanish report of the event states that while the crew were taking off the ship’s gunpowder there was an explosion which blew off part of the forecastle, throwing it to the shore. The ship then burned and later sank. Two men were on the forecastle at the time of the explosion and were carried with it. Both survived. One of the men was Dr Beaton, Lachlan Mor’s physician who had been one of the hostages. Another theory is that a merchant who helped supply the galleon, John Smollet from Dumbarton, intentionally blew the ship up. He is believed to have been an agent for Elizabeth I of England’s spymaster, Sir Francis Walsingham. Another version of the event has one of the Maclean hostages sabotage the ship by detonating the gunpowder barrels in the magazine when the Spanish began to set sail without releasing them.

Over 50 Spanish soldiers were ashore at the time of the blast and Lachlan Mór retained them in his service for another year. The soldiers along with the survivors of the galleon were released the following year and made their way to Edinburgh before they returned to Spain.

So why do people believe the San Juan de Sicilia was a treasure galleon laden with gold coin sailing with the Armada? The ships true identity appears to have been forgotten about following the sinking and rumours of gold linked to the wreck began to emerge about a century after the ship had sunk. A little bit of research on the vessel itself and you find that the San Juan de Sicilia, before joining the Armada, was the Brod Martolosi, a merchant ship from Ragusa. The vessel was pressed into service as a troopship for the Armada. Some also claim that the vessel at the bottom of the bay is the Duque de Florencia, a ship laden with gold and silver plate and carrying the Armada paymaster’s chest, a hoard of some 30 million ducats, however, the Duque de Florencia managed to make it back home.

There have been several salvage attempts on the wreck but no treasure has ever been found, and probably never will. However, a sunken Spanish Armada galleon laden with gold coin makes an excellent story. 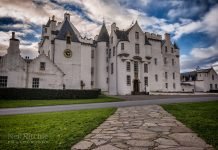 The Siege of Blair Castle 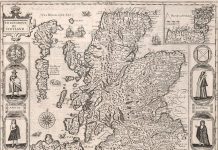 Effects of Multiple Monarchy on Scotland in the 17th Century 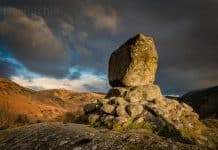